What and where to shoot 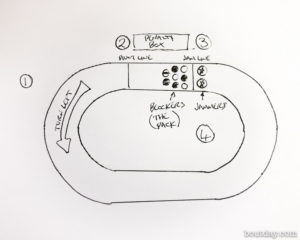 On lapping the pack, a jammer will score 1 point for every opposing player they pass. Opposing players can stop this by physically blocking the jammer.

What You’re Looking For

These are the main shots to look out for. 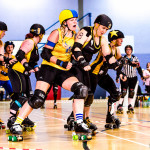 Shots of the pack where something is happening – usually one player blocking another, but sometimes just a good formation – a 4-wall, a braced wall or similar. 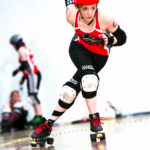 The jammer rounding the apex at full crossover. 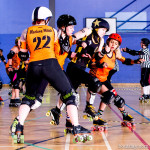 The jammer interacting with the pack – either being blocked or breaking through. 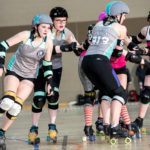 Blockers making a path through the pack for their jammer. 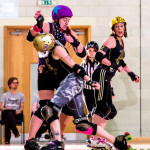 When you see two skaters on a collision course or a blocker winding up to meet an opposing jammer, be ready. 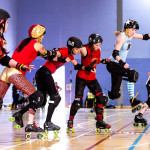 Or other jumps. The more wheels off the ground the better. 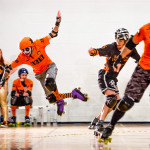 Skaters falling over (sorry, but it’s dramatic.) Shooting skaters who have gone down and are not able to get back up is considered inappropriate and should be avoided, especially while they are being attended by the EMTs. 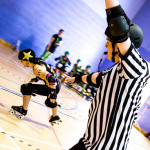 Shots of the officials, both skating and non skating, but particularly the lead jammer and their jam ref. 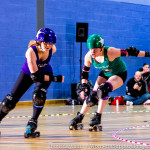 You can usually shoot anywhere that isn’t taped off and you’re not causing an obstruction or a hazard (check with the ref crew), but I have a few preferred spots: 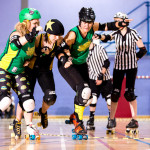 I shoot most of my images from this position. You get a good view of the pack lining up and the jammers will generally hit the pack for the first time at this apex.

In this location I shoot low, sometimes lying down if space allows this to be done safely. If you do this, you take the risk that a skater might come off of the track and hit you. Only do this if you’re willing to take that risk. 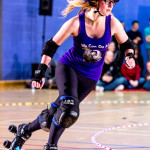 Slightly less useful, but you can get good close shots of the jammers lining up and coming round the 3-4 apex. 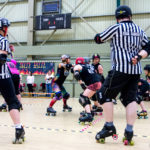 A good place for shots of the jam refs if you have a wide lens. Stay alert and try to keep out of the way.

You’ll be shooting mostly from the outside track area. There you’ll be sharing space with the skaters, the bench crew, the Outside Pack Referees (OPRs, the stripy ones) and the Non Skating Officials (NSOs, in pink). These people have jobs to do. Don’t get in their way. If you miss a shot, nobody will notice. If they miss a call the game will suffer. Be invisible. So with that in mind, a few basic rules: